Yikes! A year without updates.

Losing the nag script I wrote when moving this site to s3 is probably only one of the reasons I haven't been able to keep up. All of my side projects this year has sort of not manifested themselves at all, and such projects are usually what I write about. I have looked into and learned a lot this year, and should maybe have written about those things. instead I'm left doing a summary.

A framework/developer tool does not a project make. I've looked at Elixir and Phoenix Framework, and Sails.js, all to make a Content Management System for myself (seeing as I create so much content). I've invested some time in functional programming using ramda.js and Elm, which has hugely affected my coding style and I will continue using when I can. Through work I've added redux-saga to the tool kit, which makes every new problem seem like a perfect nail fot this hammer. I've dipped my toes into Golang at work and completed a few tutorials on Rust-lang at home, but in general I am to invested in javascript. So using javascript and following the latest trends I've also looked at Serverless Framework, which seems like a good way to go for some experiments, but I still find it quite convoluted.

Making music requires a time investment. Reason 10 kick-started my interest for music production again, and a spark in my goal to create an actual album. Maybe 2018 will see some music related updates. That is, if I manage to prioritize it at all.

3D modelling is therapeutic. I started learning Blender, and coming from 3ds Max on school I know a lot already, but there are many small differences. The work flow in Blender seems really good though. Yet again, this is another time investment, a larger one than music, since I have so much to relearn. But getting into the zone gives me a sort of calm, so it might actually be worth it. I've always loved looking at good 3D art and would love to have some of my own to show.

As I mentioned in the start, the nag script helped me focus on updating, so I sort of want to restart that thing. I just need to figure out how, seeing as my site is truly static now. Did someone say serverless/someone elses server?

Making games. I really like games, 2D arcade/action ones, and I want to create my own soon. It means I have to push myself on art, sound, music, and programming and get to challenge myself in every area.

I got to see some more of Norway, exploring a part I haven't seen so much of before. Ingvild, my wife, got a temporary position in Vestnes, Møre og Romsdal. I visited Atlanterhavsparken, Atlanterhavsveien and Atlanterhavsbadet. I got to see Trollveggen, and Ålesund from Sukkertoppen. I also spent a week in Stavanger and Farsund this summer. Other than that I had two trips to Kirkenes this year, one in February and one in October, one trip to Målselv in November, I visited London in March, I went to Iceland January. Looking back I actually did get to travel some this year. 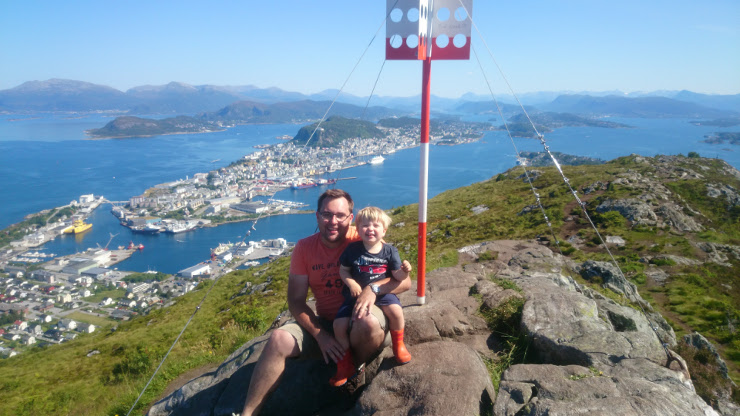 Not one to frequent concert locales I still got around to three live events this year. Blodsmak played at Hard Rock Cafe in Oslo in the end of february. Not what I would call my type of music, but still a quite enjoyable event. I got to see Mari Boine again, and magical is truly the best way to describe it. The whole band bring so much energy to the stage, and I happen to like the music quite a lot. When visiting Målselv Julietnorth was playing at "Huset" (the house), which was quite nice.

Well, it's sort of hard to know where all the time was spent, but a huge chunk went to the TV. I saw Orange Is the New Black season 5, The Handmaid's Tale, Rick and Morty, Twin Peaks, both seasons of Stranger Things, The Good Place, and Grand Designs season 11 and 12 (wish they got more on netflix). Plus random whatever's on occasionally, a habit that I really do not like and try to kick. I think I would actually recommend all of those shows except Orange Is the New Black which I would only recommend if you have seen the previous seasons (I guess you've already seen it then). If you only want one recommendation from me go watch Rick and Morty.

I think that very roughly covers it. Now, if only I'm able to nag myself, 2018 might be a better blog year.

Send me an email using this form if you want to get in touch, have input to this post, or any other comments. If it is relevant I'll make sure to add it to the post. Also if you notice any typos or weird things I'll make sure to fix that. Thank you in advance.